Not to be confused with a Telecrate. 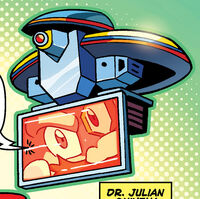 A Tele-Pod is a G.U.N. aerial drone that has been designed to serve as a two-way communicator. Apparently unarmed, it instead features cameras, speakers, and a screen that allow its operator to communicate with field agents from a safe location.

Dr. Julian Snively employed a Tele-Pod to communicate with Team Dark during their hunt for Eclipse the Darkling and the Dark Arms on Angel Island. Through it he was able to observe their interactions with both their quarry and Knuckles the Echidna and his allies Relic the Pika and Fixit the Robot. He made several attempts to order or encourage Team Dark to remove the Master Emerald from the island for him, but was repeatedly denied. After Eclipse defeated Rouge the Bat and E-123 Omega, Snively attempted to speak with him only for the Tele-Pod to be destroyed. (SU: #67, #68, #69, #70)

Retrieved from "https://archiesonic.fandom.com/wiki/Tele-Pod?oldid=133519"
Community content is available under CC-BY-SA unless otherwise noted.