Actually if you take a look at Sally's profile here, NICOLE's name is spelled like a usual name. It could have been changed since then though.Fairfieldfencer FFF 18:09, 26 October 2008 (UTC)

Well for the sake of this website I think we should leave it in capitals, strictly to distunguish NICOLE from the rest of the cast as she is a machine/holographic projection. - Dimitri the Echidna 00:55, 25 November 2008 (UTC)

"I suppose if you wanted to make the distinction between the computer and the soul, you could say the computer was all-caps. But at this point I consider her a "normal" part of the cast, so it'd be "Nicole.""

I just noticed, aside from her origins, nothing is covered about NICOLE's history before the StH #175. That really needs to be fixed. For that reason I'm putting in the "incomplete article" template. - Dimitri the Echidna 03:44, 27 August 2009 (UTC)

It could do with a bit of a clean up too. It seems this was mainly a copy from Wikipedia and the history didn't seem to meet with the Manual of Style, but I think I fixed that.Fairfieldfencer FFF 19:11, 27 August 2009 (UTC)

OK. Done some major work. Mainly read the StH series, though, but I plan to read the specials when I'm done with that.Fairfieldfencer FFF 16:48, February 25, 2010 (UTC)

Has it ever been said if NICOLE stand for something? like an acronym?if not,Im making my own...

And in 204 She talked about the bulk of her code residing in N.Mobotropolis Mainframe. So it can be presumed she doesn't reside more in the small computer but in the City using the handheld as a relay to let her reach faraway areas, or provide field help. 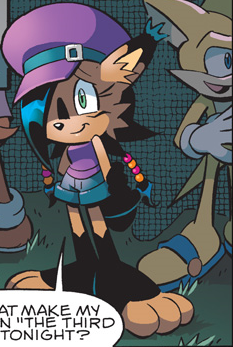 Why? Given that she has her normal look on both the cover and in the backstory, it seems to be a temporary change. The main image should illustrate the character's "default" or most recent common appearance. CrazyLea 04:57, February 3, 2011 (UTC)

The recent reboot has confirmed that the name Nicole is no longer based as a program name but named after an older member of the Acorn lineage. Also, at some point before the reboot, NICOLE started to be known as Nicole according to Ian Flynn, as she had become more than just a program. Diamonddeath (talk) 08:00, January 17, 2015 (UTC)

Retrieved from "https://archiesonic.fandom.com/wiki/Talk:Nicole_the_Holo-Lynx?oldid=116521"
Community content is available under CC-BY-SA unless otherwise noted.