Previous Issue ←—→ No Next Issue

Sonic: Mega Drive - The Next Level is the second one-shot comic book special created in celebration of the Sonic franchise's 25th anniversary. It is a sequel to Sonic: Mega Drive.

Welcome to “The Next Level”: The sequel to the hit Sonic: Mega Drive is here! Picking up right where things left off Sonic, Tails, Amy Rose and Knuckles are on the hunt for the Ancient Gears and on the move to stop Dr. Eggman’s latest scheme! But not everything runs like clockwork when Sonic breaks away to do his own thing. And Dr. Eggman has a certain high-speed robot up his sleeve. You can’t miss out on this exciting new installment in the Sonic Mega Drive series! Featuring cover art by mega-talent Tyson Hesse!

In Glitter Peak Zone, Sonic, Tails, Amy and Knuckles are fighting a large, winter-themed Orbinaut. Sonic acts cocky about the situation, leaving Tails, Amy and Knuckles to finish off the Badnik. This slightly annoys the hedgehog as he was prepared to finish it off by himself. After Sonic makes fun of Knuckles, the group move on and find Dr. Eggman in a giant snowman mech. Tails requests for everyone to attack the bottom snowball of the mech. While Sonic stands in by in irritation, the other three manage to defeat Eggman and chase the mad scientist away while allowing the blue blur to collect their fourth Ancient Gear.

Traveling to the Haunted Depths Zone, Amy asks Tails if he was sure that there was an Ancient Gear located there to which he replies that it was worth a shot as it was the closest island. Worryingly, Amy asks if there were any ghosts and Knuckles states that they would only be a threat if there was no light. While also stating that he has punched ghosts, Knuckles expresses his concern for the zone looking like a maze. Hearing this, Sonic quickly suggests splitting up to cover more ground and runs off, despite Tails and Amy's protests.

Sonic runs through the zone with ease, glad that he is alone taking it at his own pace and not having to share any glory. He then believes that the others were tough enough to handle themselves. Unknown to him, Tails, Amy and Knuckles were having trouble with a large dragon-styled Badnik that could breathe fire and was powered by a light-bulb at the end of its tail. Tails tries attacking from the air only to get burned and Knuckles gets electrocuted while trying to destroy its tail. Tails notes that the Badnik could not be hit when charged up. Amy then hits the Badnik's tail into its own mouth, blowing it up.

The three then feel a big tremor and Knuckles feels that it was not natural. Sonic is seen fighting Eggman in his tank-like drill vehicle. Eggman is so busy gloating that he fails to see a dead-end and crashes. Eggman frustratingly asks himself why he came about so many failures and he manages to escape while Sonic collects the fifth Ancient Gear. He asks if the others were able to see his hilarious victory but remembers that he had ditched them. He runs off to the next island while Amy stresses her worry for Sonic's safety. Tails assures Amy that he would be fine and has the three of them press forward.

Arriving at Eruption Ruin Zone, Sonic finds many lava ridden obstacles that prevented him from moving onward. Admitting defeat, Sonic hopes that the others were alright. Tails, Amy and Knuckles hear this and the four reconcile. Sonic tells them that Eggman was hiding in the the temple beyond a wall overflowing with lava and Tails forms a plan of how to get over it. Sonic goes into a Spin Dash and Amy hits him upwards with her hammer. Knuckles punches the hedgehog upwards while clutching a wall with his knuckles. Finally, Tails safely flies Sonic up to the top and flies back down to retrieve Amy and Knuckles, much to Sonic's satisfaction. As they make it into the temple, Tails states his dislike for the high temperature, both inside and outside. The entrance immediately closes after the four of them and a spiked wall presents itself, prompting Sonic to give respect to those who built the ruins for their consistency. A giant stone statue beside them starts to spew lava and the gang proceed to destroy it. Eggman is revealed to have been controlling it and scurries off before Sonic can catch him.

Eggman dives into a pit of lava, much to the shock of Sonic. However, he is revealed to have just activated a large chef-inspired mech. While Tails and Amy rest, Sonic and Knuckles manage to destroy the mech and retrieve the sixth Ancient Gear. Suddenly, a blue blur bursts in and knocks Knuckles off his feet. The blur is revealed to be Metal Sonic and he hits Tails aside, while taking five of their collected Ancient Gears. The robot then sets his sights on Amy and kidnaps her, escaping alongside Dr. Eggman. Knuckles angrily asks what they were supposed to do and Sonic decides that they should find out where Eggman fled to, defeat him and rescue Amy. Tails comes up with a solution; Eggman and Metal Sonic did not fly in the direction of any known island and as the Egg Mobile and Metal Sonic's flying capabilities were both short-range, they had a base located somewhere northeast. Sonic proceeds to playfully noogie Tails' head, liking how smart the fox had become.

While flying on the Tornado, the trio find Eggman's new flying base and Sonic believes that it was not as sleek as Wing Fortress but bigger than Flying Battery. Knuckles also adds that it was no Death Egg. Tails alerts Sonic and Knuckles that there were Badniks incoming, prompting the hedgehog and echidna to race in defeating more robots than the other. Sonic and Knuckles crash land on the flying base, taking out the machine guns and as Tails lands the plane, the trio rush inside, overcoming the obstacles that stood in their way. They enter into a weapons base where they are met by Metal Sonic and find Amy trapped inside a see-through Prison Egg. On a monitor, Eggman requests for the gang to hand over the final Ancient Gear in return for Amy. This brings about confusion as Knuckles thought there were seven Ancient Gears, with Tails reminding Sonic that Metal Sonic had stolen five. Sonic tries to use this to his advantage and hands over the sixth Ancient Gear. Eggman then states that he will let Amy go but Metal Sonic prepares to fight Sonic, revealing to be powered by the seventh Ancient Gear.

Metal Sonic catches Sonic by surprise, being powerful enough to hit him all around the room. Before Metal Sonic can deliver a finishing blow, Knuckles hits the robot back and Tails attacks him from up above. All three then overpower Metal Sonic, causing the Ancient Gear to run cease powering him up. Metal Sonic retreats with disgrace and Sonic retrieves Amy. Knuckles expresses his anger for letting Eggman get away with all the Ancient Gears, not knowing where they were taken to. Tails finds out from a computer that Eggman had a deep sea base directly under the airship, noting that the latter was only used for supply shipments. Knuckles wants to go after him immediately but Sonic suggests forming a plan. According to him, Metal Sonic only had one Ancient Gear and was only beaten due to Knuckles and Tails' ambush and if Metal had all seven gears, they would be done for. Tails then suggests finding the Chaos Emeralds as Super Sonic would be potentially able to counter Eggman and Metal Sonic. With this, the four of them race back to the Eastwatch Islands in search of the emeralds. 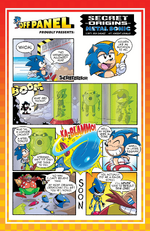 Sonic comes across Dr. Eggman's secret area not allowed to be accessed by hedgehogs. Sonic enters in regardless and finds metallic models that would be used to fight him later on. Sonic quickly destroys the robots and runs off, much to Eggman's dismay. Eggman salvages some parts and creates Metal Sonic, relieved that he will not have to rebuild him. With this he thanks Sonic.

Retrieved from "https://archiesonic.fandom.com/wiki/Sonic:_Mega_Drive_-_The_Next_Level?oldid=147080"
Community content is available under CC-BY-SA unless otherwise noted.