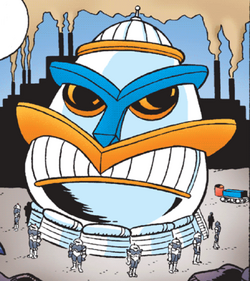 Robostorm was an orbital space platform built by Dr. Ivo Robotnik, with his own likeness, as an early means of mass roboticization. It was meant to be a means of finally defeating the Knothole Freedom Fighters, but they hijacked it and launched it into space. Robotnik and Snively pursued the Robostorm and zapped away nearly all of its power, forcing it to crash land on the lost moon Muckury. Luckily, Robotnik chose to land on Muckury to capture the Freedom Fighters, allowing them to take his ship. How Robotnik and Snively returned home is unknown, but Robostorm was never seen again. (StH: #13)

Robostorm was built to launch powerful rays that roboticize anything within a 100-mile radius of whatever the rays hit. Additionally, the device is somehow capable of jamming television airwaves so that they will only show infomercials, possibly because at the time, Robotnik had a fondness for infomercials.

Retrieved from "https://archiesonic.fandom.com/wiki/Robostorm?oldid=137056"
Community content is available under CC-BY-SA unless otherwise noted.