Mobius (also known as Mobius Prime, due to its place in the multiverse) was actually a future version of Earth, and according to this universe's timeline, Earth's year would be approximately 14,017 CE, with Mobius' calendar year at mid-late 3237. It is still unknown exactly what was the starting point for their calendar, but it was likely calculated using what the Echidna Tomes call the Days of Fury. Mobius has endured many conflicts, including the Great War, the first and second Robotnik Wars, and a failed attack by the Xorda. Much of it was also under the control of the Eggman Empire, though some sections of it remained free from its tyranny. This version of the planet came to an end in 3237, when the Super Genesis Wave irreversibly altered the entire multiverse and the Prime Zone's timeline.

How the echidnas would have records of this time is unknown, as Mobians were still in very primitive stages or not around at all yet. It is possible they learned of this event from geographical remnants of the events, or they located records of it left over from the destroyed Earth's population.

The "Gene Bomb" origin theory provided by Isaac is considered to be false as other evidence in the comics is contradictory to this. However, all other historical accounts are considered canon, as there is no contrary evidence to these events happening.

The 300 year period between the Coming of the Chaos Emeralds and the Forgotten War is based off Mammoth Mogul's look when he was 300 years old, depicted in the Mecha Madness special, due to him having the same look during the Forgotten War depicted in StH: #163. This is only a rough estimate.

Everything beyond this point has been effectively negated by the Super Genesis Wave.

Act 2:
The Fall of the Mobosaurs

Act 3:
The Rise of Albion

Act 8:
Island in the Sun

Act 11:
My Kingdom for an Acorn

Act 12:
In the Name of the Overland

Act 13:
Tales of the Great War

Act 19:
The Return of Echidnaopolis!

Act 26:
Storms of Order and Chaos 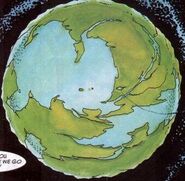 Mobius, as seen from space. 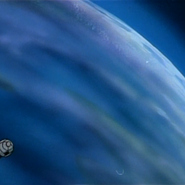 Mobius in the series. 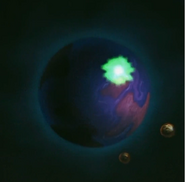 Alternate Sonic Underground Mobius, where the siblings are tyrants.

Mobius in AoStH.
Community content is available under CC-BY-SA unless otherwise noted.
Advertisement