For the Angel Island location also known as the Forbidden Zone, see Land of the Dark.

The Forbidden Zone is a region on the surface of Mobius primarily made up of dry, rocky wastelands and desert. Located in the outer reaches of Mobotropolis, the Knothole Freedom Fighters ventured into the Forbidden Zone with the recently discovered NICOLE on a mission given by the late Julayla. After getting past a number of monstrous creatures and obstacles, such as the Cyclops Robot, the Griffon and the Polysaurus Rex. Sally discovered a treasure chest with a piece of paper saying "To thine own self be true" inscribed on it, which was presumably left by a version of herself from NICOLE's home reality. (IYF)

One of Dr. Ivo Robotnik's factories was located in the Forbidden Zone. The Destructix took control of the factory in 3236 and attempted to sell it to Dr. Eggman. In 3237, Sonic the Hedgehog went to the derelict town of Gravestone in the Forbidden Zone when he received word that Tommy Turtle could be found there. He ended up rescuing a fake version of Tommy after fighting a group of robot duplicates of the Destructix. (StH: #117, #135)

The Forbidden Zone in the series. 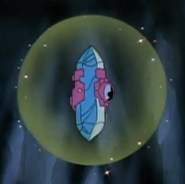 Lazaar himself.
Add a photo to this gallery
Retrieved from "https://archiesonic.fandom.com/wiki/Forbidden_Zone?oldid=150821"
Community content is available under CC-BY-SA unless otherwise noted.