This article is on the Chaos Emeralds found on Mobius Prime; you may be looking for the Super Emeralds or the Black Emerald from that same Zone. For the gems featured in the Sonic X Zone, see Chaos Emerald (Sonic X).

The Chaos Emeralds have been at the centre of many plots by Doctor Eggman. The emeralds have been gathered multiple times and their powers harnessed, having known to have been used to power up the water god Chaos, to power the Eclipse Cannon and numerous other super-weapons usually of Eggman's making. In the majority if these instances Sonic the Hedgehog and others have foiled these plans by harnessing the emeralds power themselves and becoming their Super forms. The emeralds have sometimes been the sought after by other major threats, such as the Black Arms. (VG: StHs)

After the present and past Super Sonics defeated the Time Eater, the blue Emerald was inexplicably transported somewhere in an alternate dimension, where it was discovered by the evil scientist Dr. Wily. Using the gem, Wily was able to contact Eggman, and the two joined forces, creating the Skull Egg Zone and unleashed yet another Genesis Wave upon both their worlds with the Emerald's power. They then proceeded to collect four more Chaos Emeralds, setting their eyes on the remaining pair as well. (VG: SG; MM: #24; SB: #9)

Collecting the remaining two gemstones through the efforts of their Roboticized Masters, the two doctors embarked on their ultimate agenda: powering up the Genesis Reactor to unleash the Super Genesis Wave. This wave, once unleashed, would have the potential to rewrite both universes without any limitations, allowing the doctors to become-in their own minds-gods. With the reactor powering up, the doctors gloated over their impending victory. However, the arrival of Knuckles the Echidna and Proto Man threatened their plans, forcing them to draw energy from the Emeralds to super charge their Egg-Wily Machine X. Sonic and Mega Man also succeeded in drawing power from the jewels, becoming Super Sonic and Super Mega Man, and defeated the doctor's machine. The Super Genesis Wave was unleashed, but the unaffected heroes then employed Chaos Control in an effort to restore their worlds. Mega Man succeeded without interference, but Sonic's efforts were disrupted due to an attack by Dr. Eggman. (StH: #248, #250, #251, MM: #25, SU: #52, #53, #54)

Pieces in the Planet-sized Jigsaw Puzzle

After the planet was shattered by the side effects of the Super Genesis Wave being improperly reversed, both Eggman and the Knothole Freedom Fighters learned that the Chaos Emeralds had a role to play in Mobius' restoration. As recorded in the Gaia Manuscripts, the seven Chaos Emeralds could help reunite the shattered pieces of the planet if they were brought to the Gaia Temples. As such, both the Freedom Fighters and the Egg Army began scouring the planet for them, and Sally Acorn and Eggman even hired the Chaotix and Hooligans, respectively, to aid in the search. The Freedom Fighters soon located one in Crystal Cave under heavy guard by Eggman's forces, but were able to retrieve it while ensuring that the cavern would not be damaged. Another was found by Chip, who was briefly kidnapped by the Hooligans along with the gemstone, but both were rescued by Knuckles the Echidna and the Chaotix and brought to Angel Island for safekeeping. The Hooligans were subsequently ordered to take part in the Chaos Emerald Championship in Casino Park in order to obtain another Emerald. Meanwhile, Egg Boss Thunderbolt obtained one and was instructed to use it as bait for the Freedom Fighters. (StH: #259, #260, #261, #262, #263, SU: #64, #65, #66)

The Freedom Fighters soon took the bait and fell into Thunderbolt's trap, but were able to recover the Emerald regardless thanks to Sonic's unexpected transformation into the Werehog. Unfortunately, a second trap involving a Chaos Emerald saw the Emerald being secured by Eggman's forces, with the Freedom Fighters barely escaping. They soon learned that another Emerald had been obtained by Breezie the Hedgehog, who had organized the Chaos Emerald Championship. Meanwhile, Dr. Eggman, having learned of the sheer power of Dark Gaia released by the planet's shattering, determined to secure the Chaos Emeralds and Gaia Temples to prevent the planet's restoration so he could collect Dark Gaia's power. Another Chaos Emerald was then discovered on Isolated Island, and became contested between a small squad of the Freedom Fighters and a force of Badniks under Phage. They managed to secure this Emerald, putting them in possession of six while Eggman retained one. The enemies later pooled all seven Emeralds during the conflict with Sigma, and their energies were used by Super Sonic and Super Mega Man to defeat the villain in his final form. However, Xander Payne later reversed these events using one of the Genesis Portals, leaving the Chaos Emeralds divided between Eggman and his foes once again. (StH: #264, #265, #266, #275; SU: #73, #74; MM: #51, #52)

As a result of these alterations to time, the Chaos Emerald previously secured by Eggman's forces went off course on it's way to the Death Egg. It later ended up under the protection of Cassia the Pronghorn and her sister Clove, which led to an engagement between them and several of the Freedom Fighters. (StH: #276, #277, #278, #279)

Each emerald contains supposedly unlimited quantities of pure Chaos Energy, a highly powerful form of energy able to warp space and time when properly utilized. Alone, an emerald is able to act as an extremely effective energy resource for machines, empower an individual with magical powers, enhance existing magical powers, and cause supernatural phenomenon. When all seven emeralds are gathered they have unlimited energy potential and can imbue whoever wields them with a powerful, nigh-invulnerable state.

The Four Chaos Emeralds of Immortality, Invincibility, Invisibility and the Power of Life. 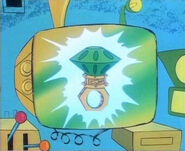 A Chaos Emerald on a ring owned by Easy Eddie.

The Chaos Emerald in Sonic Underground, which keeps the Floating Island aloft. 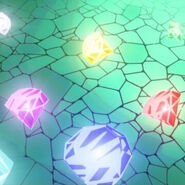 Chaos Emeralds in Sonic X.
Add a photo to this gallery

Retrieved from "https://archiesonic.fandom.com/wiki/Chaos_Emerald?oldid=149974"
Community content is available under CC-BY-SA unless otherwise noted.