It’s the END for EGGMAN in "Eggman’s Dozen" Part Four: The final, frantic fracas is here! Dr. Eggman and his Egg Bosses square off against the Naugus Twins and the fearsome Crystal Sonic! Will everyone make it out of the battle alive? And who is the twelfth and final Egg Boss? All the action and answers are here! Featuring cover art by Mr. Sonic comics, Tracy Yardley and a "Baddie Bunch" variant by the radical Ryan Jampole!

Eggman's Dozen: Part Four
(this story occurs between Sonic the Hedgehog #279 and #280)

Dr. Eggman engages in a battle with his Egg Bosses against Walter Naugus, Wendy Naugus, the Witchcarters and Eggman's crystallized badniks, including Metal Sonic, now referred to as Crystal Sonic. Nephthys asks Maw to perform his "trick" once more but he refuses as he is too close to his allies. Thunderbolt feels conflicted when she has to destroy Eggman's creations and Mordred Hood tries to revert the Witchcarters back to their regular state of mind using his Vertigo-Inducers.

Wendy stresses how hard it is for her to drive and control both the Witchcarters and the badniks at the same time. Eggman strikes the Troll wizards while they are off guard but gets hit by a Spin Dash from Crystal Sonic. Before Eggman can be destroyed, he quickly equips himself with his Hard-Light Armor made of pure energy and knocks Crystal Sonic away. Receiving full-on blasts from Walter and Wendy's Crystalmancy, Eggman notes that pure energy is not a substance that could be crystallized. Following this, Eggman and his Egg Bosses are able to weaken the troll wizards momentarily.

Eggman takes a shot at Walter using his Hard-Light Armor arm cannon, but Crystal Sonic gets in the way of it, allowing Walter to escape. The blast reverts Crystal Sonic to a badly damaged Metal Sonic. Eggman then forces Wendy to release the rest of his badniks. Instead of punishing her however, Eggman makes Wendy an Egg Boss in order to have an even number of them and because he wants an Egg Boss that understands the mystical elements. After this, Eggman orders Orbot to prepare the injector for Wendy and her Witchcarters.

The Egg Bosses return to their stations, some exhausted and others still prepared for battle. Eggman orders Wendy to find an undisclosed object that is missing from his inventory. After this, Eggman relaxes in order to savor his victory. Meanwhile, Walter Naugus is seen hiding in an unknown area harvesting energy from what appears to be the Master Emerald. 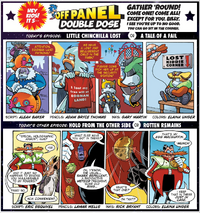 Retrieved from "https://archiesonic.fandom.com/wiki/Archie_Sonic_Universe_Issue_86?oldid=139861"
Community content is available under CC-BY-SA unless otherwise noted.